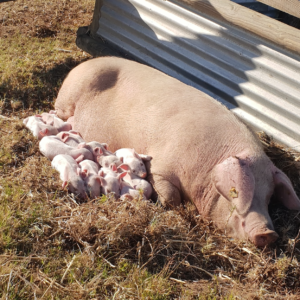 We are a huge fan of the methods of not only organic and free-range but also biodynamic farming that Angus Macintosh chooses to use across his whole range of animals on the Spier Wine Estate in Stellenbosch. Important for us is his focus on carbon sequestration – his method of farming actually helps store carbon in the soil

One major environmental issue of factory and feedlot farming (the norm in SA), is that the waste produced is uncompostable – since antibiotics kill the microbes that would break the compost down. Furthermore, this kind of dumping of waste in huge pits creates large emissions of sulfide, methane, ammonia, and carbon dioxide.

However, when overgrazing is prevented, you can lock carbon back into the soil – since up to 65% of the plants carbon is stored under ground. The animals act as human tractors, spreading their fertiliser thin and fertility is increased.

Biodynamic and regenerative agricultural principles and practices are applied in the raising all of Spier farm’s animals which includes cattle, pigs, broiler chickens and laying hens, as well as vegetables and wine. Situated on 126 hectares of irrigated pasture, the cattle are moved 4 times per day. The broilers and layers every day and the pigs once they have completely trashed an area which takes about 5 days. This ensures that the farm is neither overgrazed or overfertilised. Whether the conventional farming operation is caged or so called “free range” the housing is fixed and so the animals are under constant disease pressure as they live with their manure. The idea is that pastures recover to be grazed every 6 weeks.

Below is a wonderful example from Angus’ farm of land that has been grazed upon by pigs on the right, and not yet on the left.

There are 3 farms that we have found so far that do not use farrowing crates and really produce “Pasture Raised” pigs. Lowerland in Prieska which operates a truly regenerative system like Farmer Angus and Glen Okes in Hemel en Arde, both of which currently supply in whole or half carcasses. We are in discussions with Ryan Boon about this as a possibility, but we would obviously need a demand for all cuts of pork to make it worth his while. This is a subject that I truly invite feedback on if you are interested.

Farmer Angus is the other. I have visited Angus’s farm at Spier Wine Estate, although before his pig adventure. Angus does not cage his pigs and uses no potentially cancer inducing nitrates or nitrites are used in any of his farm butchered products. His pigs are rotated every 3 days to a new area to root for leguminous crops, where they act as tractors, spreading newly sewed seeds into the soil with their feet and noses. The also get a longer life, since it takes longer for free range pigs like these to reach a good weight. The pigs are supplemented with the only glyphosate free pig feed in the country, which is mostly non-GM maize. They are also given a “free choice mineral lick” which has kelp and salt, meaning that the pigs get the minerals they need to be healthy, and these are then excreted into beautiful fertiliser! Click here for further in depth information

On 126 hectares of land, pigs are moved every 3 days,’ beef cattle are also moved four times a day, the broiler and layer hens are moved daily.  When you compare with the alternative of an animal with 10 square metres standing for 110 days, it is pretty impressive.

The above is a quick video of Angus explaining his cattle’s free choice mineral lick to me last week at the farm.

He is fixing his soils biologically, rather than mechanically. Typical grass fed cattle are left out with free reign, which means they return to the same patches of grass, killing them and releasing all the carbon back out into the air. Angus’s cattle graze for one day on this small patch before being moved, ensuring all the carbon from the grass is sequestered in the soil.

Recent studies in California show that grasslands hold more resilient stores of carbon than forests, because they are impacted less by droughts and wildfires. THAT BLOWS MY BRAINS!!

This doesn’t even include the potential benefits of good land management to help boost soil health that Angus is practicing.